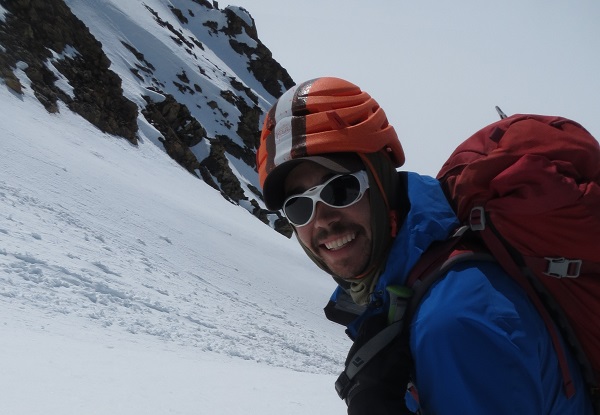 If you’re walking across the Root Glacier and see a Cleveland Browns helmet off in the distance, you might be spotting SEAG’s own Bryan Kerr. Originally hailing from Ohio, Bryan was introduced to rock climbing while in college, and quickly took off with the sport. Enjoying the mental and physical challenges it provides, he began to expand his climbing experience from the world of vertical rock to ice and alpine climbing. Since then, he’s also taken up skiing, and spends his winters in Park City, Utah, as a “professional” ski bum.

A die-hard fan of all Cleveland sports, Bryan shows his colors with his climbing helmet, painted to match that of the Browns, and he receives weekly sympathetic looks from his co-workers when the NFL season starts in the fall.

Since he started working for SEAG, Bryan has been fascinated by the mountains of Alaska and the adventure that they provide. He can be seen guiding glacier hiking and ice climbing trips out on the local Root Glacier, and also can be found in the backcountry, where he can share his love of backpacking and mountaineering with you. Whether Bryan guides you across the ice, snow, or alpine tundra, he’s sure to fascinate you with his knowledge, stories, and sense of humor. When he’s not out exploring his local mountains, Bryan can be found scarfing down impressive amounts of food, tinkering with gear, and rooting for the Cleveland Browns.

So next time you’re in McCarthy, keep an eye out for that orange helmet – maybe you’ll be lucky enough to have Bryan as your guide!