of a major peak in Wrangell-St. Elias National Park!

We are proud to announce that this morning Tim Duffy, long-time SEAG guide, close friend of the company, and owner of Pangaea Adventures, completed a solo first ascent of Peak 12,190, just east of Mt. Bona (seen on some maps as Mt. Jordan). This is a major peak in the St. Elias Range and an accomplishment to be proud of! 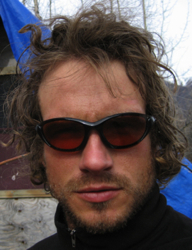 Our group of 6 climbers (Chad, Wayne, Matt, Ben, Lane and Tim) have been at the mountain for the last 8 days and have made 3 team attempts at the summit, consistently being shut down by poor snow conditions combined with technical climbing, and unable to move quickly enough as a group to make it up during the coldest hours of these warm summer nights. Early this morning Duffy headed up alone, reaching the summit in just 2 hours, and returning to camp with a partial ski descent just 6 hours after he left.

Click the link below to listen to Wayne’s dispatch from the field announcing the victory. And congratulations to Tim – we love you and we’re so proud!

Click here for First Ascent dispatch from the field!