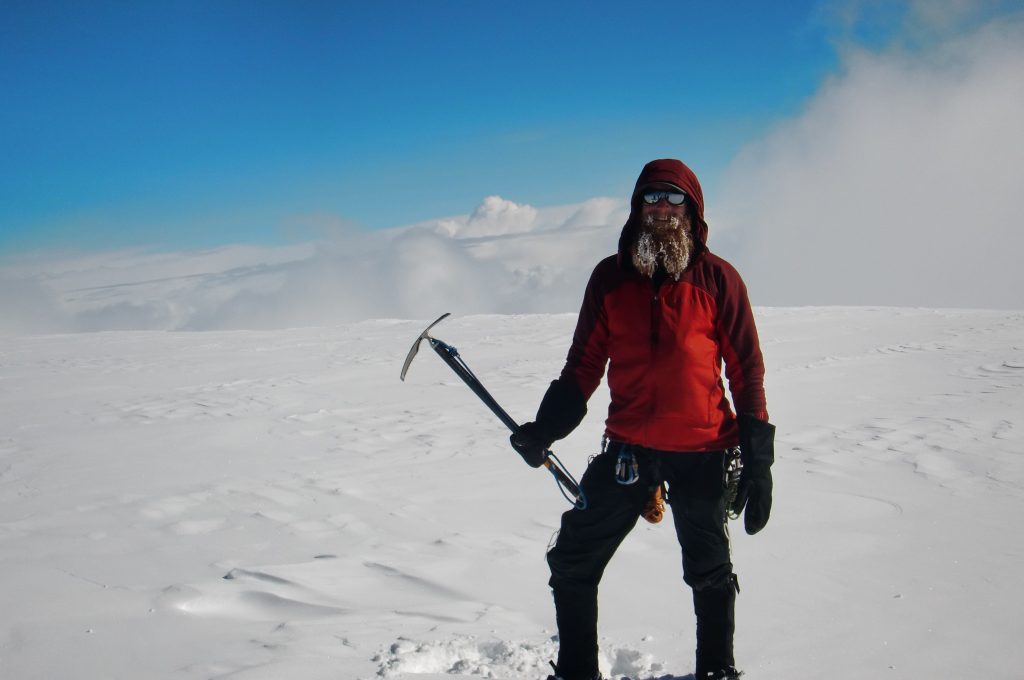 If you had to pick one guide on our staff who “looked the part,” it would definitely be Scott. Known for his long red beard, Scott is the quintessential rugged Alaska mountain guide. And he’s certainly earned that title. He first joined us in 2012, and have repeatedly been impressed with his strength, stamina, and ability to provide folks with the ultimate Alaska backcountry experience. A “multi-tool” guide, he kicks off his season with mountaineering trips, and then progresses into rafting, backpacking, and ice climbing trips after mountaineering season is over. It’s a good thing, because he needs that hearty rafting food to put some meat back on his bones after his mountaineering trips!
Scott came to us with a varied background of experience. Prior to guiding, he had been a nanny, a van-driver in Denali, and taught kiddos rock climbing. Since joining our crew, he’s prided himself on filling his winters with adventures. He’s a multi-year veteran of the Alaska Wilderness Ski Classic, a grueling 150 mile winter traverse through the rugged Alaska backcountry. He’s also completed a rickshaw race in Indonesia, a winter traverse across Norway, and a winter ascent of Rainier.
What has been his latest adventure? It’s the biggest of them all! Scott now spends his winters chasing down his adorable little toddler, and raising her out of his tiny house. She (and Scott’s lovely wife) spend the summer in McCarthy, excited to greet him when he gets off his big mountain trips. What a family!
So whether you’re joining us for a mountaineering, rafting, climbing, or backpacking trip this summer – you just might be lucky enough to have bushy-bearded Scott Peters as your guide!
Guide Spotlight – Scott Peters2018-11-062018-11-06https://www.steliasguides.com/wp-content/uploads/2018/01/stelias_logo2.pngSt. Elias Alpine Guideshttps://www.steliasguides.com/wp-content/uploads/2018/11/scott-on-summit.jpg200px200px
Recent Posts
Categories
Archives
Recent Posts
Search Trips