As guides, we tend to do little theorizing about weather before a trip. Although larger pattern weather systems may be predicted, in our mountainous and glaciated terrain, they often don’t have predictable outcomes. Rain on one side of the Kennicott Valley rarely means rain on the other side too. I usually preface all gear selection by saying that we should all be prepared for everything from 40°F and rainy, to 90°F and sunny. That said, sometimes we still get surprised by the crazy weather Alaska will throw at us.

I set out with two clients on a 4 day backpacking trip into Donoho Basin, a favorite local hiking spot with epic views of 3 different glaciers, and some of the biggest mountains on the continent. Not too bad for our backyard, eh? Our trip began on May 31st during a week of mixed weather that had lows around 45°F and highs in the low 80s. For us, the end of May is often a turning point in spring, and the flowers had all started to bloom on the trail as we hiked out to our first glacier crossing under full, warm sunshine. We lunched under partly cloudy skies and enjoyed a striking view of the Stairway Icefall, a 7000ft tall wall of crushing ice, as it slowly disappeared into the clouds.

At some point during our post-lunch bushwhack, rain started to fall and brought the temperature down with it. It was a creeping cold that we didn’t fully realize at first, because we were moving fast with heavy packs. But as the moisture started to soak through our clothes (no gear is truly waterproof in an Alaskan bushwhack) and we became more tired, we started to see our breath and decided that tea and a warm tent sounded like a good option. 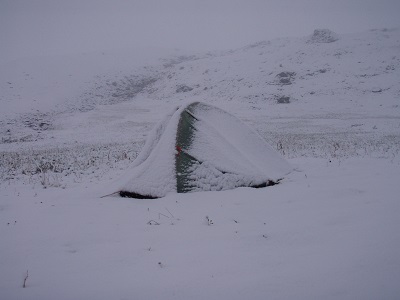 Throughout the night, we could hear the rain patter on our tents but around 5am, all went silent and I settled into the comfortable thought that it was June 1st, probably 100°F in my hometown in Texas. Spring rain is no big deal, especially because we were only camping at 2000ft above sea level. It was such a pleasant sense of anticipation until I unzipped by tent to find we were in a snowstorm with about 200ft of visibility. Unexpected to say the least, but also fantastic to see! We had been in t-shirts just 24 hours earlier and now we were slugging cocoa like our lives depended on it.

A trip I have made many times (and only ever experienced as a swampy trudge) became a winter wonderland before our eyes, and the snow continued for the next 48 hours. On our return trip, possibly the coldest morning we encountered, we hid from the snow under a pine tree and joked about our useless fingers. That is, until the sun came back out for our final glacier traverse and roasted us like a microwave. If you have not felt the UV blast from a fully lit glacier, especially after you thought the sun and its warmth were gone forever, you can stand as close to an open over door as possible and get a pretty good idea of how it felt. Layers came off in record time, and the shivering from the morning became a distant memory to laugh at as we marched back into town. 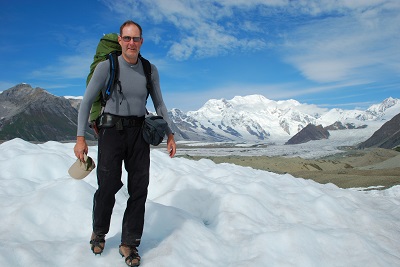 “How’d you guys like that snow?!” I joked with my colleagues back in town, just 4 miles away as the crow flies from our blizzard camp.  Confused looks all around,

“Snow? Its been muggy all week!”