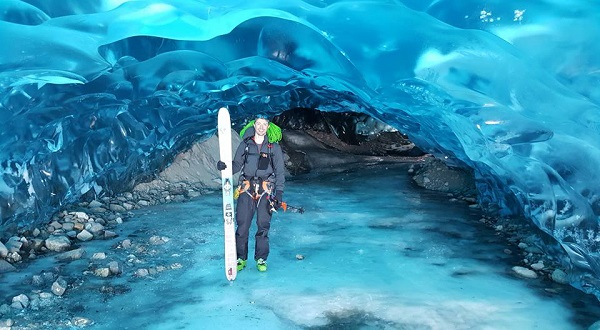 Dividing his time between his rigorous accounting studies and his passion for guiding, Cody works extremely long hours. He’s often the first to rise in the mornings, completing an early morning workout before he begins his day of guiding. Returning from the glacier, he works nights in our office solving complicated accounting problems, making him one of our hardest working guides on staff. But don’t think that Cody is all work and no play. He’s constantly scheming up ideas to hike and packraft through the Wrangell Mountains, scouring topo maps and Google map imagery to plan his next route. Last year, Cody and fellow guide Kelly took a few days to packraft from Skolai Pass down the White River into the Yukon Territory of Canada, hitch-hiking back to McCarthy via car, truck, and bush plane. Well done boys!

Fueled almost exclusively by powdered milk and condiments (parmesan cheese and ketchup), Cody’s poor eating habits do not extend into his guiding. Shockingly enough, he’s one of the better chefs on staff, and his Backcountry Biscuit and Mac n’ Cheese recipes are crowd favorites. He has an innate ability to remember facts and figures, and can go into extreme details about the flora, fauna, natural history, and glaciology of the Wrangell Mountains. Be sure to ask him lots of questions – if he doesn’t know the answer, he’ll look it up ASAP and add it to his extensive knowledge bank.

So if you’re up in McCarthy and find yourself paired up with a quick-witted guide who’s snacking on unground coffee beans and wearing a collapsible visor, consider yourself lucky. You’ll be spending the day with Cody.